Adventure Has No Age Limit

Chau Smith has been outrunning the clock for years. You’d never guess she’s 74. You also might be surprised that she’s on zero medications, has no special diet, and she just might run about 50 miles in a day if she so chooses. Let’s get to know this timeless woman of adventure.

Some say age is just a number. Do you agree, and, if so, how “young” do you feel?
I never pay a lot of attention to my age. You see, my father was executed by the French in 1947, forcing my mother into hiding, and, I was born without a certificate. My birth was not even recorded until 3 years later when my mother felt safe enough to do it legally. I have to smile when people ask me my age because they often guess I am in my 50s. The only effect age has had on my running is that each year I get a bit slower.

You didn’t start running until almost age 40. What inspired you to start?
My husband, Michael, was already a marathon runner when we married in 1983. I used to bike behind him during his training runs. In 1993, my four siblings and their families (25 total) started to arrive in the U.S., after a lengthy sponsorship process. The emotional and financial stress of settling them here took a toll on me. Starting up my business was an additional stressor. I developed back and neck problems. I was on the brink of having back surgery when I ditched my bike and started running with my husband. The pain disappeared, and I was suddenly feeling good about myself. Running became my panacea.

What were some of the biggest challenges when you started running, and how did you overcome them?
Like so many other runners, finding time each day to put in my training while earning a living and, in my case, dealing with four families of immigrants was one of my biggest challenges. During the day, I would help my siblings find jobs while promising to translate if an employer would hire them. I enrolled my nieces and nephews in school and at night helped them with their homework. As a result, my training runs either started at 4 a.m. or after 9 p.m.

How did you decide to take on the challenge of running 7 marathons on 7 continents in 7 days?
Since both my husband and I were avid runners and travelers, we decided early on to couple our travels with marathons. After a few years, we realized we had run marathons on most of the continents, so our next goal was to complete a marathon on all 7 continents. We did it in 12 years. We took our last marathon trip to Antarctica with Steve Hibbs, the owner of Marathon Adventures. A year later, Steve announced his Triple 7 adventure — which involved running a marathon on every continent on consecutive days. I asked myself why not, so I decided to do it. I didn’t want to someday look back and regret not doing it.

Completing 2 marathons back to back is pretty incredible … and you did 7. How did you train for this feat while still running a business? Did you ever sleep?
I’m an insomniac and have learned to function with little sleep. Since it has not affected my running, that condition has worked to my advantage. I was running before and after work to train for Triple 7. On Saturdays, I would work a short day (4 hours). I would get up early, run to work, then run back home — 48 miles round-trip. Sunday and Monday were my days off, and I would run a marathon distance. The other days of the week I would run 6 to 8 miles.

Which was more difficult — the physical strain of the marathons or the burden of travel and lack of sleep?
Travel was the most difficult part of the challenge. Schedules were timed down to the hour, sometimes to the half-hour. We had a cutoff time for each marathon to enable us to catch the flight to the next destination. Every day it was run, shower, head to the airport. I ate while in the van or on the plane. I slept whenever I could. Frankly, the marathons were the easiest part of the venture. Running cleared my mind and gave me time to enjoy the countryside.

Which marathon was most memorable and why?
Cairo, Egypt, was my favorite place. The running club there, Maadi Runners, was enlisted to sponsor our run. They assigned each of our runners with two local runners to pace us. I was lucky as there were two Americans working and living there who paced me through the “crazy” Cairo traffic. As a woman in a largely Muslim country, I needed the advice and protection of those who were familiar with local customs.

Chau Smith runs the world. Watch this short film to hear her story.

Which was the most challenging and why?
It was King George Island in Antarctica. The finish of that run stands out in my mind because after so many times around a 2-mile loop, it turned out that what I thought was the finish line was only 26 miles. I had 0.2 left to run. My friend, Dan Reeve, was waiting for me, anticipating that I would need some moral support for the last 0.2 mile. I was so happy to finish, I cried as a small crowd of runners congratulated me.

But you weren’t finished, were you? How soon before you decided you needed a new, bigger challenge?
I read about New Zealand being considered as another continent. I wrote to our group, suggesting a reunion there the next year. Our organizer took the suggestion, rolling out a new adventure called the Triple 8 Quest. I felt guilty that I wanted to run again so soon after my Triple 7. It was quite expensive, but since I felt running was critical to my physical and mental health, I justified doing it. The organizer let me know when he was down to the last open spot. I took it and never looked back.

Most people would find it amazing that you are on no medications. Are there any secrets to your overall good health or advice you can share with others?
I never want to take medications. I refuse taking aspirin, even vitamins. I just don’t believe in synthetic cures. When I catch a cold, I put lemongrass and mint in boiling water, throw a sheet over my head and breathe in the steam. I love being outdoors, especially when I’m under stress. Just getting outside for a short run or walk enables me to overcome just about anything thrown my way. My diet is not unusual: heavy on fresh fruits, vegetables, tofu and fish. I don’t eat a lot of red meat or sweets, but chocolate is often my reward for completing a long run.

What advice do you have for others who want to take up running later in life?
My advice is always start slow — walking or running a short distance. It helps if you have other people who are in the same shape, for mutual support. Join a local running club. A club was a big help for me when working on increasing my speed. I was lucky to have my husband to start running with. He always brags that he helped me become a runner. Now, he runs after me.

I’m very comfortable running by myself, anywhere, anytime. Still, I must be careful. As women, we have many responsibilities. Running must become a routine, something so integrated into your life that you don’t feel right without it. Don’t accept self-defeating excuses such as, “I can’t run today because ... ” Rain or shine, you can always throw on your running clothes for a workout. Be a little selfish with your time. If you are healthy and happy, your family will benefit.

Tell us about your running streak and the reason you started it.
On March 15, 2020, my family traveled to the Big Island, Hawaii, to celebrate my 50-states marathon. My husband and younger daughter ran a half-marathon. My older daughter and her husband were there to cheer us on. The next day, Hawaii started to lock down because of COVID-19. My husband and I flew home to Kansas City, Missouri. I decided then to run every day until a vaccine was found. It was my way of supporting the research effort. My streak reached almost 300 days of running when the vaccines started into production. I decided to continue to run every day until the virus is under control.

What’s next on your adventure bucket list?
I want to finish the 6 major marathons. I have 2 more to run: Berlin and Tokyo. I would like to train to run faster to qualify for the Comrades ultramarathon in South Africa.

Ready to run? Find running clubs near you.

See yourself as a runner. This easy-to-use GPS running smartwatch encourages running and healthy lifestyles. It can even take the guesswork out of training with suggested workouts tailored to you. 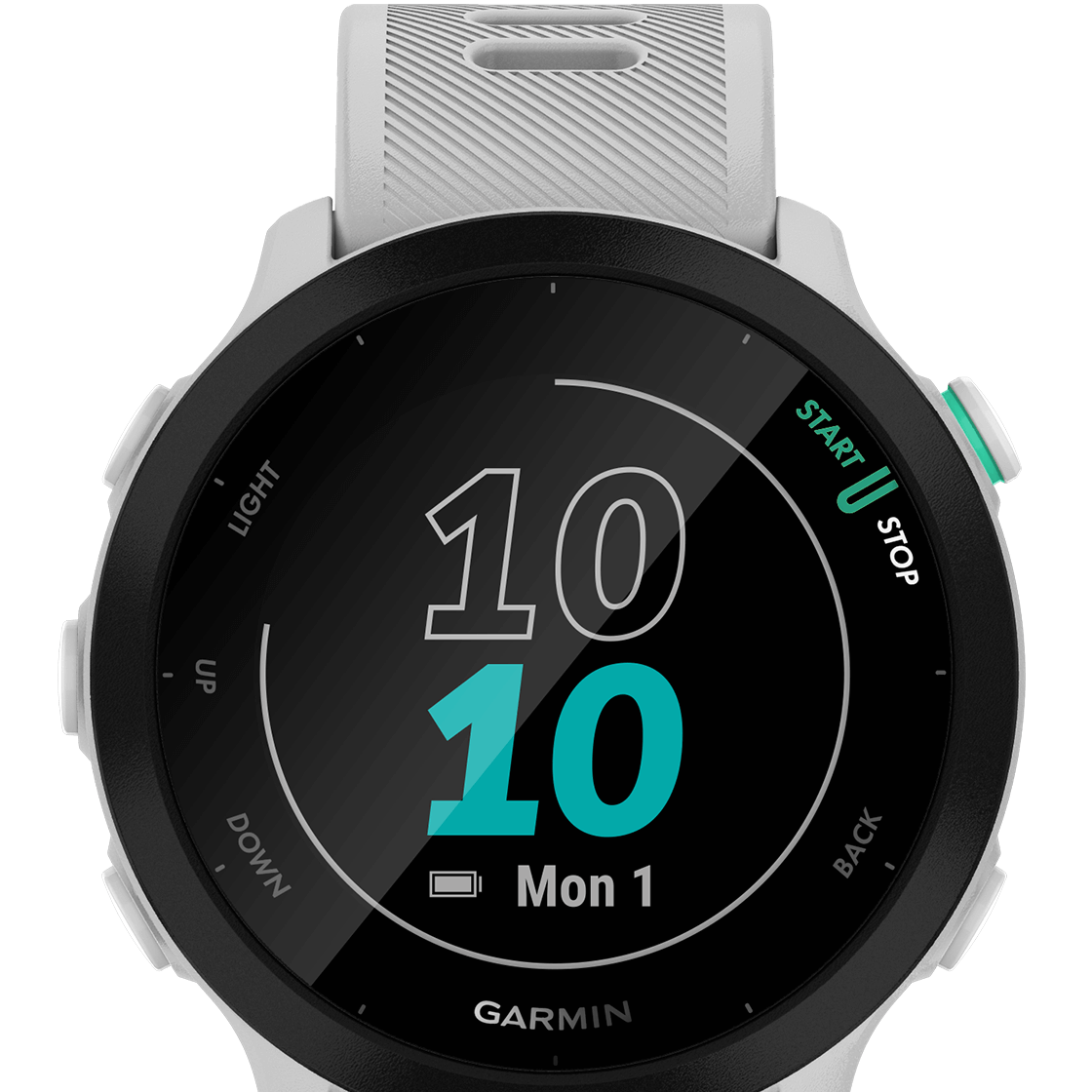